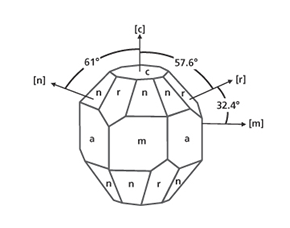 The angular relationship between the inherent optical axis of the crystal and the required part is known as orientation. Zero Degree or C-Axis, C-Plane windows and lenses are most common when crystalline orientation is specified. Each orientation has specific gains in specialized areas of use. When no particular crystal axis is defined, random orientation sapphire usually will suffice and can be more cost effective.

Typical choices for part orientation are: